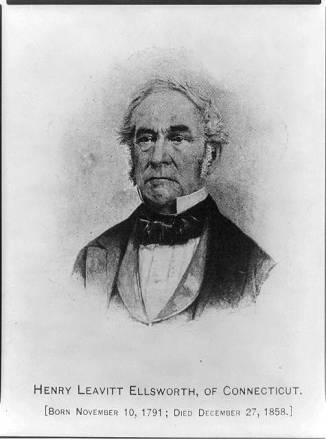 Ellsworth was born in Connecticut in 1791 and graduated from Princeton University.  His family connections led to an impressive career.   Oliver Ellsworth, the third Supreme Court Justice of the United States, was Henry’s famous father.  The younger Ellsworth quickly earned a valuable reputation as a bright innovator.  He became known as the “Father of the United States Department of Agriculture.”

President Andrew Jackson appointed Henry to oversee the re-settlement of Indian tribes.  He was tasked with studying the country, marking boundaries, and establishing order and justice.  Ellsworth had compassion for the plight of Native Americans, but the decision to remove them was out of his hands.

Ellsworth first saw the Wabash River Valley during one of his trips, which sparked an interest in the fertile land.  He amassed over 93,000 acres of land in the Wabash River Valley and developed tenant farming, farm mechanization, and agribusiness, which significantly impacted agricultural progress in Greater Lafayette.  Ellsworth moved his family to Lafayette where he built a lavish 20-room home at the northwest corner of what is now 7th and South Streets.

Ellsworth once served as U. S. Patent Commissioner in Washington, D.C., and was a

friend to Samuel B. Morse, the inventor of the telegraph. Ellsworth’s daughter, Annie, was given the honor of choosing the words for the first telegraph message.  Morse set up his instruments in the chambers of the U.S. Supreme Court.  Several witnesses observed the moment in history, including Henry Ellsworth, Henry Clay, and Dolly Madison.  Annie handed a note to Morse that contained a message that read, “What Hath God Wrought?”  Annie’s message, a Bible passage, was successfully transmitted via the telegraph, and became an important moment in history that impacted the world.

Note: Annie Ellsworth was a charter member of the General de Lafayette Chapter, Daughters of the American Revolution in 1894.

This site was created to give a voice to the silent majority in the Greater Lafayette area. The local Mockingbird Media does not represent We, The People. View more posts