An old, but controversial tombstone sits just southwest of the old Sexton’s office within 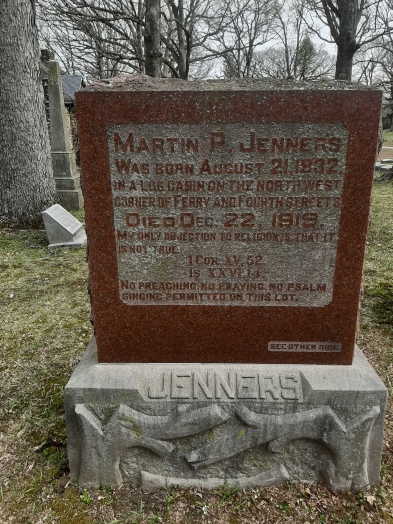 the Spring Vale cemetery in Lafayette, Indiana. The story behind the Martin P. Jenners’ tombstone controversy has been written about by historians over the years with limited information extracted from minute books and a December 23, 1919 obituary that was printed in the local newspaper.

New details have been unearthed by the discovery of a June 22, 1907 newspaper article from The Star Press (Muncie, Indiana), which has shed new light on an old story. Martin P. Jenners was interviewed by a reporter when he was 76 years old, twelve years before he died in 1919. The details have been long forgotten, but here is the rest of the story story told in some of Jenners’ very own words:

“When you are dead, that’s the end of you. Then it’s oblivion—finis,” began Jenners in a June 22, 1907 article printed in The Star Press.

That is the solution of man’s ultimate destiny as announced by Martin P. Jenners, aged 76 of Lafayette, when asked what he proposed to do about moving a monument erected on his lot in beautiful Springvale Cemetery, northeast of Lafayette.

The granite stone was erected over a year ago and ever since has been an eyesore to the trustees of the cemetery association, who believe that the inscription on the granite is sacrilegious. Recently a movement has been discussed looking to the bringing to bear of some influence on Jenners to have the stone removed but he is adamant on this proposition, although in other matters he is ready to indulge the opinions of others, and if not convinced by their arguments he is at least tolerant.

Thousands of visitors to the city have gone to the graveyard since the erection of the monument for no other purpose than to see if it is true that any man would so tempt the anger of a higher power in the future as to have chiseled on the stone that marks his last resting place the sentiment that they believe is a direct insult to divinity.

The following is the inscription: “Martin P. Jenners was born August 21, 1832, in a log cabin on the northwest corner of Ferry and Fourth streets. Died —–, 19–. My only objection to religion is that it is not true—Cor. XV, 52; Is. XXVI, 14, No preaching, no praying, no psalm singing permitted on this lot.”

Below the main inscription and to the right are the words, “See other side.” On the other side is the insignia of the Red Men’s lodge, bearing the letters I. O. R. M. over the eagle and below the bird the words, “Wabash Tribe No. 11.”

This man, whom those religiously inclined believe has dared to brave the wrath of God, claims to be the oldest living man born in the city of Lafayette. He has lived there all his life and as he says received training in the Sunday schools and churches of his youth, such as they were at that early day. From the first, however, he was a skeptic, and was the despair of his Sunday school teachers and those who assayed to instruct him. They always found it an easy matter to explain puzzling points to others, but in Martin Jenners they always meet their Waterloo in his everlasting, “Why?” which he would fling at them on every occasion when doubt assailed him.

As he grew to manhood, he says he made a careful study of the Bible, and at last came to the conclusion that no dependence could be placed in its teachings, as he insists that “Its contradictions and inconsistencies mark it as the dreams of writers who lived thousands of years after facts alleged in its chapters could have occurred.”

The two verses of the Bible that Jenners relies upon most staunchly to support his contentions are those chiseled on his monument. 1 Cor. XV, 52 reads: “In a moment, in the twinkling of an eye, at the last trump: for the trumpet shall sound, and the dead shall be raised incorruptible, and we shall be changed.” The fourteenth verse of the twenty-sixth chapter of Isaiah reads: “They are dead, they shall not live; they are deceased, they shall not rise; therefore, has thou visited them and destroyed them.” He says that here is shown a contradiction concerning the resurrection that he cannot bring himself to believe in it. He will furnish similar alleged inconsistencies by the hour if asked to do so. From these supposed contradictions, Mr. Jenners argues that the entire fabric of religion based on the Holy Writ is false and unsound in its teachings.

When asked as to his belief Mr. Jenners said that so far, he knows there may be one God or there may be fifty; he will not deny that there is a supreme being, but he says he does not believe there is. He presents some interesting arguments in support of his theories. For instance, he said: “Every once in a while, you will see $60,000 or $100,000 put into a magnificent temple of worship. With imposing ceremonies, it will be dedicated to the Lord. And then the very first thing that the trustees do is to put up lightning rods. It strikes me as strange that if the Lord can stay the lightning’s belt, calm the raging waves, or still the disastrous wind, he would look out for his own property without the intervening agency of the lightning rod.”

Jenners does not try to impress his beliefs on others. He is remarkably well read and an entertaining conversationalist. He has received letters from all over the world concerning his object in placing the inscription on his monument. Some of these letters have praised him for the courage he has shown; others censuring him and endeavoring to make him see the error of his opinion. Some of the letters of the latter character have even come from abroad. In speaking of these, Jenners says: “It seems to me that as we are sending missionaries over there from this country, they have material to work on at home without bothering me.”

He dresses in a dark blue suit of serge after the fashion of twenty years ago, as he does not like the cut of the men’s clothes today. He wears a large Red Man’s emblem. He has enough money to live comfortably the rest of his life and, therefore, takes things easily. He wanders about from store to store and engages in conversation with whomever may be near and willing to talk. His greatest boast is that his check will be honored at any business house or bank in the city.

Mr. Jenners says he is not at all worried over the attitude of the trustee, as he owns his lot and took great pains to have his tombstone erected just as he wanted it and means it shall stay where he put it. He is an enthusiastic Red Man and helped draw the design of the emblem of his lodge for one side of his stone himself. The tombstone in which so much interest is centered is a handsome red granite with a brown stone foundation.

“I think when I am laid away beneath that stone,” said Mr. Jenners, “that everything is ended for all time. So many people ask me why, so long as I believe this, I try to lead a decent life and conform to all the laws of the land and of society. I tell them not for the same reason they do—the fear of hell afterwards or the anger of a God, but because I have a natural decency about me that tells me it is right to do right for right’s sake, and wrong to do wrong for the same reason. The fact that everything ends with death is no reason why we should not live uprightly and honestly while in this world.”

This site was created to give a voice to the silent majority in the Greater Lafayette area. The local Mockingbird Media does not represent We, The People. View more posts